How could between seven and 12 million people died and very few people know about?

This is a question that plagues us today- what is a genocide?

The Holodomor was a man-made famine in the Ukrainian Soviet Socialist Republic between 1932 and 1933. Millions of Ukrainians died of starvation in a peacetime catastrophe unprecedented in the history of Ukraine. 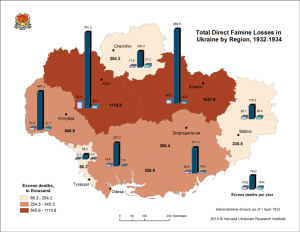 The Ukrainian SSR was bordered by the Black Sea to the south, and the Soviet republics of Moldova and Belarus, and Czechoslovakia. The population was about 30 million and the region was approximately the size of Texas. Today, Ukraine largely covers the same area.

The years 1932-1933 were the period in which the famine occurred, but there were many historical factors leading up to the famine.  The policies of mass agriculture and forced collectivization enacted by the Soviet Union, which led to the famine, began in 1929.

Through his collectivization policy, Stalin’s goal was to increase productivity from the farmers through eliminating small, privately-held farms and turning to mass agricultural policies.  This resulted in the Soviet government seizing all privately owned farmland and livestock, which had a devastating effect on Ukrainians in a country where 80 percent of the people were traditional village farmers. Among the farmers, there was a class of people called Kulaks by the Communists. They were formerly wealthy farmers who owned relatively large farms or employed farm workers.[1] Stalin believed any future uprising would be led by the Kulaks, who were pro-Tsarist and anti-Soviet, thus he implemented policies intended to eliminate the Kulaks as a class of Ukrainian farmers. Collectivization meant forcing millions of small farmers off their own land into larger collective farms. However, many Ukrainian farmers saw this as a return to serfdom and resisted giving up their land.[2]

Armed brigades of Soviet troops forcibly confiscated land, livestock and other property, and evicted entire families. Thousands of Ukrainians were forcibly removed from their homes and sent by train to uninhabited places in Siberia. Stalin then created mandatory quotas of foodstuffs to be shipped out of Ukraine to other parts of the Soviet Union.2  However, Ukrainian resistance only increased and there was rebellion in the streets, including the assassination of Soviet officers and Ukrainians burning down their own homes. Later, the Soviet Union increased production quotas that were impossible to meet, cut rations to those still in Ukraine, and coordinated food seizures in Ukrainian villages. This resulted in widespread malnutrition and starvation.  In 1932 the Soviet Union called for the arrest or execution of anyone found taking food from the fields where they worked.  Military blockades were even built around Ukrainian villages to prevent the transport of food from the outside into villages.  During the famine, about 25,000 Ukrainians died every day.1

For decades, Ukrainians could not openly process the national trauma of the orchestrated famine because the Soviet Union would not allow it.  Soviet authorities even banned any 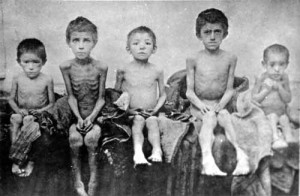 discussion of the famine, and went as far as falsifying depictions of history such as portraying the famine as a natural disaster that was inevitable.[3]

Estimates regarding the number of Ukrainians who died in the Holodomor range from 3 million to 8 million. The Holodomor has been recognized by today’s Ukraine and over a dozen other countries as a genocide of the Ukrainian people carried out by the Soviet Union.  The Russian government continues to cite claims of a man-made famine as “falsifications of history.”[4]  Australia, Brazil, Canada, Columbia, Estonia, Ecuador, Georgia, Hungary, Italy, Latvia, Lithuania, Mexico, Paraguay, Peru, Poland, and the United States regard the Ukrainian Famine from 1932-1933 as a genocide.[5]

Ukraine has many memorials to commemorate the Holodomor and the millions of people that died during the famine including the Barrow of Sorrows monument in Mhar, Poltava Oblast.  The National Museum “Memorial to Holodomor victims” in Kiev opened in 2008.  It is located on the Pechersk Hills and consists of a memorial complex and an underground Hall of Memory that contains permanent exhibitions and artifacts from the period during which the famine occurred.[6] The United States has memorials in Washington D.C. (pictured to the right) and Chicago.  Ukraine marks the fourth Saturday in November of every year as Holodomor Remembrance Day.