You Can Be A Witness To The Greatest Trial That Never Took Place But Should Have March 15, 2021

At 10:45 in the morning of March 15, 1921, on a street in Berlin, Germany, Talaat Pasha, former Grand Vizier of the Ottoman Empire, was killed by a 24-year-old Armenian student, Soghomon Tehlirian.  At the trial, with the death penalty on the table, Soghomon’s attorneys turned that table and put Talaat, the ‘victim’ on trial for the Armenian Genocide.  These are the facts of history.

But imagine if these events had transpired differently. What if an International Criminal Court had existed in 1921? And what if Talaat had not been assassinated. If the case against Talaat had been tried in the ICC, what would the verdict have been?

Wonder no further. On the 100th anniversary of Talaat’s death, that trial will begin.  We would like to thank Michael Cunningham, Director of Global Scholars Diploma Program, Michael Gavlak, Award-Winning Hollywood Producer, and the legal students at Del Valle High School who demonstrate this court case- The ICC v Talaat Pasha- Monday, March 15, 2021, at 10:45 Central time- 8:45 Pacific. 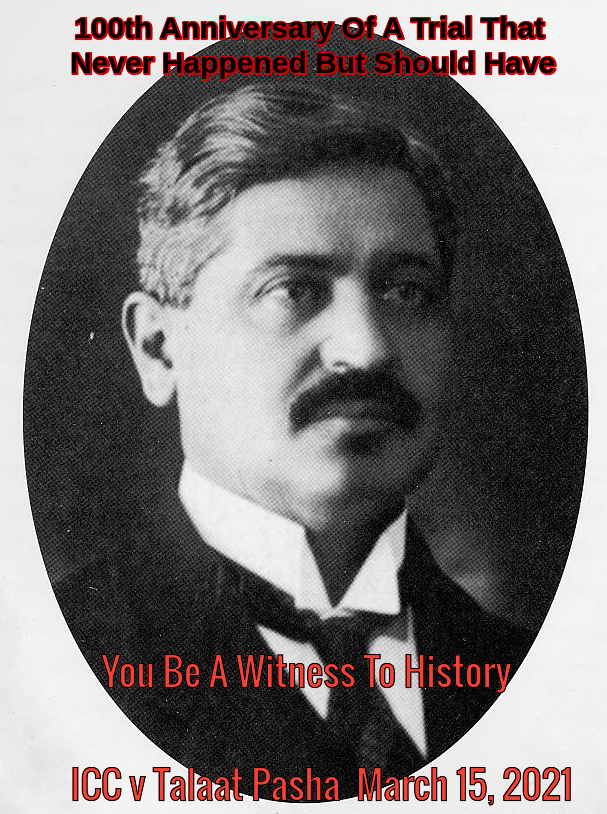