Imagine sitting in a six-person van, gazing out the window as you roll through the 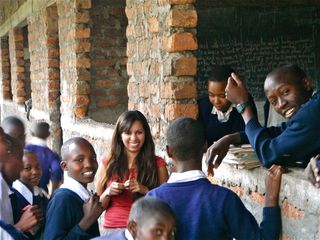 rugged landscapes of northeastern Tanzania. As the van moves along, after awhile it seems almost as though you are watching a film on repeat as the same scenes recur again and again just beyond your window. A herd of lively goats being tended by young children. Women in perfect forward folds tending to crops in a lush field. Men in toques sipping chai together amidst their parked bicycles and motorbikes. Repeat.

Many may come away from an experience in northeastern Tanzania with this degree of distance intact. The scenes repeatedly play out before you as you watch and observe parts of what make up the Tanzanian way of life. The Education Beyond Borders Tanzania project (2012), which I was elated to be a part of, effectively dismantled this limited observer role. Through the EBB project, we were warmly welcomed not only into an array of schools and classrooms, but lively staffrooms, decorated offices, dusty bookrooms, and warm homes. The curtain was pulled back, and we became deeply immersed in the culture and community of Leguruki, a lovely village nestled between Mount Kilimanjaro and Mount Meru.

One may wonder what it is about EBB that made such a meaningful immersion possible. The more I learned about EBB as the project unfolded, the more I came to realize the significant way in which EBB stands out amongst the sea of not-for-profits carrying out work in East Africa. Being comprised entirely of teachers, and working directly with teachers in local contexts, at its heart EBB operates from the simple - yet effective - dynamic of teachers learning and sharing together. To see the depth of the professional teaching community that was formed between the local Tanzanian educators and our EBB team was heartwarming. Every hug, every handshake (African style!), and every smile further strengthened our collective bond.

I also came to greatly admire and respect the thoughtfulness and self-awareness with which EBB carries out its work. While we were offering professional development to the local Tanzanian teachers surrounding collaborative learning and inquiry-based learning (two pedagogical concepts not largely found or practiced in rural Tanzania), we ensured our workshops were as accessible as possible, as well as culturally sensitive and appropriate. Further, so many of the local teachers we had the pleasure of working with were dynamic, spirited, dedicated, and knowledgeable; they were already making wonderful strides in their classrooms. As such, instead of coming in with a top-down approach (as so many administering educational programs in the developing world tend to do) and heralding our Western knowledge as superior, we acted as facilitators and engaged in mutual learning with the local teachers that built off of both their knowledge and strengths. Likewise, our Tanzanian colleagues were incredibly gracious and always happy to share with us; whether this was a discussion of the challenges of teaching in Leguruki over a lunch of goat curry and spinach in the school courtyard, or sharing their hopes for the future success of their students while listening to Tanzanian hip hop in the teachers’ lounge, at every turn these wonderful teachers welcomed us into their lives. From our time in Leguruki, I learned more on both a professional, as well as personal level, than I ever could have anticipated.

My experience being part of the Tanzania project (2012) is something I will cherish forever. I am incredibly humbled to have been part of such a wonderful and enthusiastic team effort, and to have had the opportunity to collectively work towards positive change in the realm of teacher learning and change in rural Tanzania. During the past summer I travelled to Kenya for the second time. For approximately a month I was fortunate enough to work with Kenyan and Canadian colleagues on three Education Beyond Borders (EBB) projects. Each project provided me with opportunities to share, to learn, and to grow with other professionals. One of the most powerful experiences was returning to Gilgil, where I had spent three weeks the previous summer.

Over the course of the past year I kept in contact with some of my colleagues from the Gilgil and Naivasha districts. As spring drew near we collaborated professionally on the planning of this summer’s Navaisha-Gilgil Student-Centred Methodology workshops. There was nervousness and excitement in this process. It was to be the first year that Kenyan teachers would take on the roles of project leaders, and primary planners for nearly all facets of the preparation and delivery of the workshops. In fact, there would be no direct Canadian presence for the teacher workshops in late August. Noble Kelly was the only other Canadian teacher going to Naivasha-Gilgil this year, and we were set to be focused on observation and feedback.

This was to be an important step for the Naviasha and Gilgil districts, as well as EBB. The EBB model aims to support districts and teachers in such a way that they are able to take ownership of sustainable professional development over the course of four or five years. As the longest running project in Kenya, Naivasha-Gilgil had provided lessons for other projects in East Africa. Now that it was in its fifth year, it was time to discover just what the next steps to local sustainability would look like in a project that was approaching the end of the model’s cycle.

With the anticipation and curiosity of how this transition would unfold, Noble and I travelled towards Gilgil in early August. As we approached Utumishi Academy, where we would be working with trainers and facilitators, I recalled 2011. That year I witnessed the reunion of Kenyan and Canadian teachers who had worked together previously. I wondered if I would experience the same sense of palatable joy, and feeling of homecoming that I had witnessed in others previously.

The wonders soon became answers, and as old friends poured in to the room it felt as if we had spent merely a few weeks apart, rather than a year. The warmth of reconnecting with my Kenyan friends and colleagues, who inspire me with their dedication to students, learning, and teaching, is difficult to fully convey. The intense experience of EBB projects forges friendships that last over thousands of kilometres and years. This intensity also fuels an ambition for collaborative and student focused education. The next two weeks were filled with passionate discussion, debate, and preparation. Long hours and little electricity were but small obstacles as the core team of experienced trainers planned how to welcome new facilitators, and create new workshops. Admittedly there was some uneasiness as the reality of a new future, with less concrete ties to EBB, took shape. However, by collaborating and sharing successes of the past year, it became apparent that this new future would be no less meaningful, inspiring or effective than the previous four years. In fact, the strength and commitment of the teacher leaders in Naivasha-Gilgil was on full display, and it was clear to me that future professional development in the area can be focused specifically to meet local needs.

The teachers in Naviasha and Gilgil truly embody the EBB philosophy. No one person owns the process, there is no one way to always do things. New participants, facilitators, and trainers are welcome to share new ideas, and to develop new resources. Feedback is consistently pursued, and positively given, with support and care. There are many hands to lift heavy work. This process may not always be comfortable, or easy, but it is always fulfilling, full of learning, and focused on improving the future learning of students.

This year, close to one hundred new teacher participants in Naivsha-Gilgil attended professional development workshops at the end of August. Noble and I had returned to Canada by that point, but we were able to connect briefly to this gathering over Skype. A sense of accomplishment, collaboration, fulfilment, and unbridled joy among our friends and colleagues came across loud and clear. Professional development and collaboration is entering a new era in Naivasha-Gilgil. I am honoured and humbled to have worked with amazing colleagues and fantastic friends. I look forward to sharing and learning in new ways as an exciting new time for EBB and teachers in Naivasha-Gilgil begins.