Five educators travelled to South Africa to work with their colleagues in a couple of the townships near Cape Town in the area of Information & Communication Technologies integration. As many rural schools are now receiving donated computers and get connected to the Internet, they are becoming increasingly frustrated with the added administration and lack of skills to effectively implement and integrate computer use in their schools.

These educators from Canada delivered workshops to discuss and train administrators and educators on the issues around computer use and integration and seek to create relationships between schools in North America and South Africa for mutual learning on global issues and mentorship.

We also worked to build capacity within a local NGO to develop trainers and implementation models that will be put into practice in the interim. 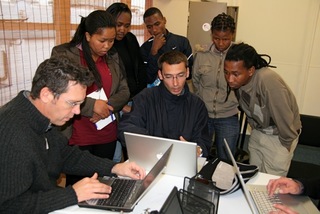 We worked closely with Edunova, the NGO working to help integrate ICT use in rural schools in South Africa, and The Khanya Project, which is an initiative of the Western Cape Education Department established in April 2001 to determine the contribution that technology could make towards addressing the increasing shortage of educator capacity in schools.

The workshops at Glendale Secondary (the host school in Mitchell's Plain) started on Monday, June 30th with a feedback session with members of the Department of Education (Khanya) and Edunova (a local NGO) working with helping schools make productive use of ict. The actual workshops started on Tuesday and went to Friday. 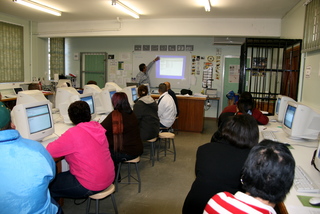 Though some of these educators had had some exposure and workshops on computer use, they have not really made the transition into integrating technology across the curriculum or looked at the big picture of an implementation/use plan. As the workshops progressed, the teachers were excited to try many of the new Web 2.0 technologies and had productive discussions on developing a school wide plan for implementation as well as department and lesson level integration ideas.

An important outcome of the workshops was to get participants connected with other educators from South Africa and other countries to collaborate and grow. To that end, those who did not have emails were walked through the process and then we looked at creating an online professional development community with the use of wikis and blogs. The next week the same workshops were repeated in the township of Gugulethu and was hosted by Fezeka Secondary. This school was chosen to help enhance some of the initiatives started by Education without Borders and to help create synergies between NGO's. Though a majority of these teachers had little to no training in computer use, they were no less motivated to learn all they could. In fact, many became users of wikis and blogs by the end of the sessions.

Overall, the workshops were well received and the participants were very excited to start using their newly acquired skills. They realize what a great resource they have and wanted to start using it to assist in engaging their students and enhancing learning and their own professional development. From our survey, 100% of participants indicated that they increased at least one level of proficiency in their skills and knowledge (a majority jumped at least two levels) and that they would like to see more of these types of workshops and for a longer duration. 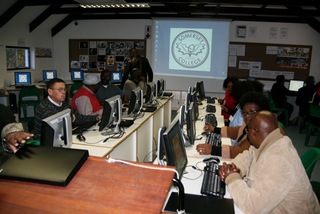 During our last weekend in South Africa we assisted a group of school principals as they were put to task during an ICT boot camp facilitated by Edunova. The issues raised and the resulting discussions were eye-opening and very appreciated by the participants.
Visit our wiki to see the materials and resources used for the ICT integration workshops: TWB ICT Wiki

We want to sincerely thank the numerous donors whose gifts of equipment (cameras, laptops, etc.), resources and money made this trip possible. We will now move forward to stay connected and create a network of colleagues both here and in South Africa to share, collaborate, mentor and support. We are also planning the growth of this project for next year.