In preparation, the six-member team began to meet once a week over Skype (VOIP application) beginning in April '09. Time was spent on familiarization with the moodle environment and discussing best approaches for delivering content. The moodle environment was also used to collect and store digital content. The team members took the commitment to the weekly meetings very seriously and it fostered team building that served us well once we were in Africa. 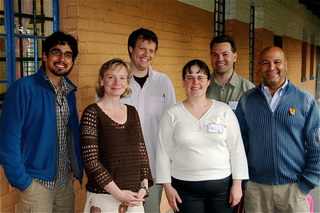 with their colleagues to address the needs of educators in townships near Cape Town in the area of Information & Communication Technologies integration. As many rural schools are now receiving donated computers and get connected to the Internet, they are becoming increasingly frustrated with the added administration and lack of skills to effectively implement and integrate computer use in their schools.

These educators from Canada delivered workshops to discuss and train administrators and educators on the issues around computer use and integration and seek to create relationships between schools in North America and South Africa for mutual learning on global issues and mentorship. We also worked to build capacity within a local NGO to develop trainers and implementation models that will be put into practice in the interim. We worked closely with Edunova, the NGO working to help integrate ICT use in rural schools in South Africa, and The Khanya Project, which is an initiative of the Western Cape Education Department established in April 2001 to determine the contribution that technology could make towards addressing the increasing shortage of educator capacity in schools.

Our first full day in Cape Town was spent providing background culture and context to the new team members. We spent some time at the primary school hosting the workshops so we could familiarize ourselves with resources and the stability of the school computer lab and Internet access. Two SmartBoards were also in other classrooms.

Week one workshop content included basic computer skills, ICT strategic planning, effective presentation skills (PowerPoint), Internet search skills, lesson-planning and evaluation of ICT. In general, feedback from the participants was that they desired more time for hands-on practice and thought that one week was too brief. We received many enthusiastic responses from the participants. Since we have returned to Canada, I am very pleased to say that I have heard from a number of those South African teachers. This year is a marked difference from last year when we communication was sporadic. The ning site we created for the teachers (ictchamps.ning.com ) remains active - this in large part to the efforts of Khanyiso Tose and Quinton Davis from Edunova. An important outcome of the workshops was to get participants connected with other educators from South Africa and other countries to collaborate and grow. 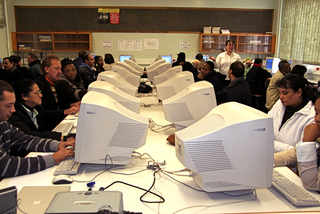 Workshop content included social networking for professional development, moodle training, building ICT vision, modeling ICT integration, emerging technologies, and laptops for teachers. Again, a ning site was created for the Khanya facilitators (capefacs.ning.com) which has not been as active as the one maintained by Edunova. Again, feedback from participants was very positive. Reflections posted throughout the week in the ning forum discussion areas show insight and enthusiasm from the workshop participants.

The final week was spent in debriefing meetings with Edunova and 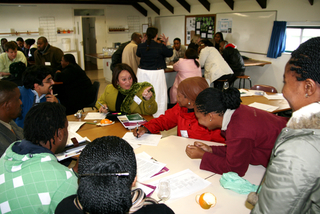 Khanya, school visits and additional ICT workshops to the Edunova facilitators (SmartBoard, multimedia and moodle). We also assisted a group of school principals again this year as they were put to task during an ICT boot camp facilitated by Edunova. We took them through the process of identifying infrastructure/resource implications with the use of ICTs in education and how to develop a school implementation plan. The issues raised and the resulting discussions were eye-opening and much appreciated by the participants.

Overall, the workshops were well received and the participants were very excited to start using their newly acquired skills. They realize what a great resource they have and wanted to start using it to assist them in engaging their students and enhancing learning and their own professional development. From our survey, 100% of participants indicated that they increased at least one level of proficiency in their skills and knowledge (a majority jumped at least two levels) and that they would like to see more of these types of workshops and for a longer duration.

When all was said and done, in South Africa in July 2009, six teachers, experienced in the use and integration ICT educational technology, facilitated workshops for 12 Edunova facilitators, 62 primary/secondary participants, 90 Khanya facilitators, and 25 principals. With new knowledge and skills, these 189 participants will be able to positively impact the learning of approximately 9,000 students. 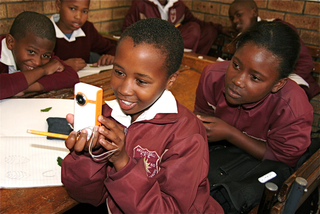 Click here to see pictures of our workshops with: Teachers and Principals/Khanya facilitators.