In June 2010 educators from Canada, England and the United States converged on South Africa. For three, this was a return trip. For two, this was the first trip. For all five, it was a life-changing
experience.

The 2010 South Africa Project Team of Education Beyond Borders worked with educators in the country's Eastern Cape and Western Cape provinces. Designed to meet the needs of participants in the area of Information Communication Technologies, the team mixed the introduction of ICT tools and their implications with best practice pedagogies for their integration into local curricula.

EBB's Eastern Cape project was a Year 1 implementation. Year 1 teams operate with the mission of understanding the needs and wants of in-country partners and designing initial workshops to meet those needs and build a base of systemic professional development to eventually be solely designed and maintained by in-country partners. 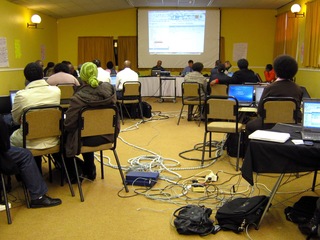 According to one of our coordinating partners in 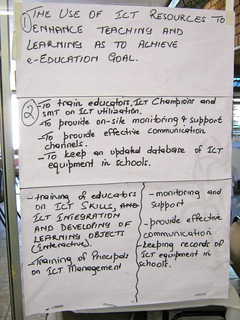 Eastern Cape, any efforts to improve ICT integration within education were fighting against two prevalent myths. 1) Many teachers saw ICT as a new problem for them to handle outside their regular disciplines. 2) Educators believe "ICT can never ever assist teachers in the classroom."

Keenly aware of the danger of building dependence on outside organizations for training, the team took the approach of designing training sessions built around the idea of facilitating collaboration across e-Personnel. Of particular focus was Google's apps suite as well as improved search strategies and educational social networks.

Aware of the limitations of connectivity and power within the province, the team also designed sessions around integrating ICT where these limitations existed. Indeed, throughout the week of the project, connectivity was oftentimes intermittent, calling on facilitators to adjust the week's timeline and improvise frequently. These improvisations included sessions on effective digital presentation strategies as well as front-loading work that can be completed by teachers and learners within the classroom prior to interacting with ICT so as to utilize available resources more efficiently.

Largely, this feedback was directed toward participants' colleagues, challenging them to cull as much from the experience as they could to better serve the teachers and learners in their districts.

Feedback directed toward the team focused on the need for even more collaboration
strategies as well as increased time to practice those skills introduced at the week's beginning. The team responded to this feedback and narrowed the scope of the remaining sessions in the interest of providing participants time to inquire more deeply as to how to best improve their practices and facilitate teacher development. 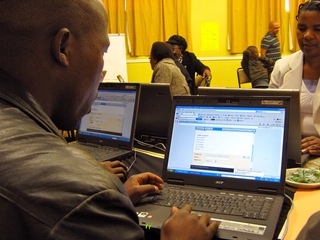 Moving forward in Year 2, participants identified by the team as well as those who self-select will begin to take ownership of workshop facilitation in partnership with Year 2 team members. Possible areas of further investigation could be the utilization of mobile technologies for professional development as well as the design of a central hub for teacher lesson plans as well e-Personnel workshop plans. For planning, Year 2 team members are advised to consider SMS messaging for collaboration with in-country partners as it is often preferred for collaboration. 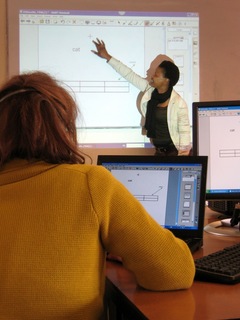 In its third year, EBB's Western Cape project focused largely on sharing facilitation responsibilities with in-country partners as well as building those partners' capacity for workshop design and facilitation. Collaborating with educators based within the townships surrounding Cape Town, the team focused on the project for three weeks.

The week focused on building capacity of teacher comfort with ICT from the ground up. In the 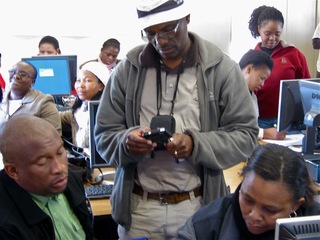 first session, participants found themselves faced with computers completely unplugged and disconnected and then asked to work with those around them to return the computer lab to working order. One participant commented she had been frightened to turn on a computer prior to the workshop but felt empowered to complete basic troubleshooting following the session. As the week progressed, participants explored tools such as Microsoft's Office Suite as well as free digital storytelling applications. Again, the introduction of tools was blended with pedagogical best practices to better build a transfer of skills to the classroom as well as ensure the furthering of personal inquiry across the sessions' target skills and understandings.

As outlined by EBB's 4-year model, in-country partners in the Western Cape project took on greater ownership of session design and facilitation for Week 1 and worked to tailor the week's design to needs of teachers of which they were keenly aware. In Week 2, the team worked to design workshops around the self-identified needs of those in-country partners around areas of workshop design and facilitation. 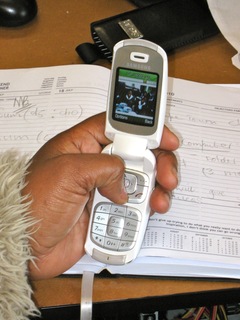 Building off of issues identified in a joint debriefing of Week 1, EBB members worked to design workshop sessions on identifying areas of need, working with adult learners and capacity building for the teachers with whom they worked most frequently. Again, a great deal of focus was put on working to meet those needs identified by in-country partners to build ownership for all stakeholders. Some key needs included:

By the week's end, the partners exhibited higher confidence levels as well as much greater skill at workshop design and facilitation. Again, each person was led through the drafting of an individual professional development plan with specific and measurable goals for deepening their understandings of self-identified areas of need.

For Week 3, each team member was deployed to a school site of teachers from Week 1 to provide more focused assistance for those identified as likely leaders or "champions" of ICT integration. Rather than approaching the schools sites with uniform purpose, team members worked to assess each site's level of need and specific interests surrounding ICT integration. From there, each team member worked to design a plan for Week 3 that would meet each site's specific wants and needs.

Moving forward to Year 4, in-country partners will take the lead in planning and coordinating training workshops for Western Cape educators. EBB team members will play a reduced role in facilitation and planning, only offering help where needed with an eye toward helping in-country partners to refine their approach to working with adult learners. As planning is undertaken, it is recommended that those team members participating in Year 3 are partnered with Year 4 team members to maintain consistency of message as well as help to reduce the learning curve inherent in working in a foreign setting.