Facilitator training: A core contingent of 24 teachers were trained as teacher 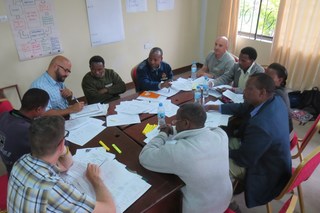 facilitators from the Leguruki and Ngarenanyuki Wards, and they have expressed their eagerness to collaborate with local teachers throughout the year to identify their learning needs and to achieve their professional development goals. This is a substantial increase in the number of trained teacher facilitators since last year. The common thread for the facilitation training was implementing strategies to engage large class sizes (50+). The three topics we focused on were Differentiated Instruction, Collaborative Learning, and Inquiry-Based Learning. The facilitators were given a significant amount of mentoring in the design and facilitation of workshops and in peer observation and feedback. Preliminary analysis of the exit surveys administered at the end of the five-day training session for teacher facilitators indicates that they are confident in two areas: 1) their ability to design and facilitate workshops; and, 2) their ability to engage with local teachers to ascertain their learning needs and expectations. This team of facilitators will form the nucleus of future facilitator trainers. 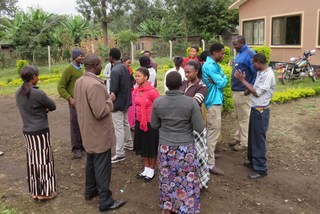 Added to this, Professional Learning Communities (PLCs) have been successfully established in both wards, a Facebook site has been set-up for their ongoing communication and collaboration, and PLC coordinators have been identified and trained in their role and accountabilities as leaders in fostering professional development for teachers in their communities. Less than one month after the Canadian EBB team left Tanzania, the PLC coordinators are hard at work meeting the needs of their community. For example, one of the PLC coordinators from the Ngarenanyuki Ward has already facilitated a workshop for teachers in his community, to which he received positive feedback from participants about the value of the session to their professional advancement.

The Ward Education Officers in Leguruki and Ngarenanyuki Wards lend their leadership support to the EBB project as it continues into 2015. As well, EBB has made significant gains by establishing contact with representatives at the District Education Office. They praised us for our achievements and contributions in their district and offered their support. 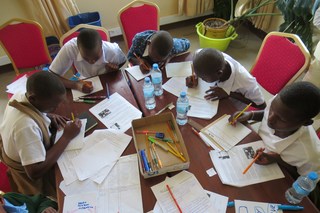 We also conducted a one-day student leadership workshop in each ward. A total of 56 secondary students attended. The students participated in some collaborative activities discussing leadership issues and skills, as well as how to practice these skills in their schools. The students were also given a talk by the president of the Arusha Technical College Student Union and a tour around the campus with a focus on the agricultural programs.

A huge THANK YOU to our team who volunteered for the 2014 program: