This year marked the completion of our program cycle in two wards in TZ. Following team and host recommendations we implemented an additional program delivering Head Teachers and Facilitator workshops in March as well as a summer program. 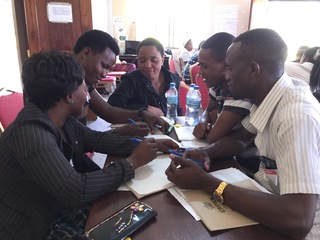 28 Head Teachers / Principals, as well as Ward Education Officers (WEOs) from Leguruki (Lg), Ngarenanyuki (Ng) and King’ori (new ward this year) attended the conference. During the day we familiarized head teachers and district officials with

Priority was given to introducing new collaborative activities, practicing the use of graphic organizers, exploring and using the EBB Facilitation and Collaborative Learning Activities Handout. Also, several hours were devoted to planning and practicing a

Collaborative Workshop for teachers to be delivered in schools in the period April to July 2016. Facilitators from each ward had the opportunity to meet during the Facilitator Training and discuss an action plan for the period April to July 2016. The issue of EBB Canada’s exit strategy starting in July 2016 was discussed in the workshops and in a debrief meeting with all the WEOs, the EBB Tanzania coordinators and veteran facilitators. 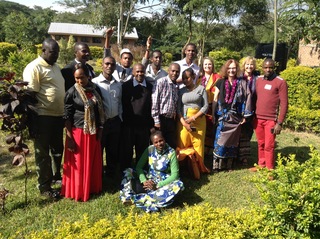 The Canadian team delivered the workshops according to the planned schedule: Differentiated Instruction & Learning Styles; Peer Feedback and Mentoring; and Inquiry-based Learning. Over a day was devoted to designing and practicing the two-day Teacher Conference for King’ori teachers and the one-day Student Conference (three teams of trainers working concurrently). The Data Collection session was prepared jointly and was facilitated by local trainers, Makungu Nkwabi and Godlizen Kaaya, on Day 4. The exit surveys for the trainer training revealed a veryhigh degree of satisfaction, and recognition that these activities/sessions were all useful and welcome. On Day 1 of the trainer workshops, trainers reported on the activities in their wards since March 2016, and on Day 4 held a meeting for each ward to chart their plan for the coming year, that includes workshops, demonstrations, meetings, and mentoring.

July Teacher Conference: The Teacher Conference was facilitated by two teams of trainers and delivered to the new ward of King’ori. 50 teachers attended the first day of the conference and 36 the second day. Feedback from participants was very positive and confirmed that the ideas introduced were new to the King’ori teachers and that the activities were relevant and practical for classroom use. The WEO for King’ori, Mr. Kimaryo, attended both days. 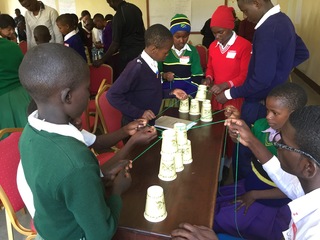 A team of trainers delivered a 1-day Student Leadership Conference for 55 students from Primary and Secondary Schools in the six wards. The focus was on practical activities, team building and leadership skills. Students expressed a high degree of satisfaction with their day.

The two EBB Ward Coordinators and four WEOs attended a meeting with the Canadian team to prepare a presentation for District Officers on the need for ongoing professional development. The presentation to the DEO took place in Usa River on August 3rd and was well received; the DEO promised support.

A huge THANK YOU to our team who volunteered for the 2016 program: