"These projects are excellent.  I am sure that many of my students would be willing to volunteer as
mentors." 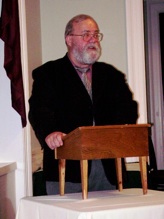 Alfred Charles “Tuna” Snider is the Director of the Lawrence Debate Union and the Edwin W. Lawrence Professor of Forensics at the University of Vermont. He has been at UVM since 1982. He graduated from Brown University, has an MA from Emerson College and a doctoral degree from the University of Kansas in Communication Studies. As a debater he was third at the National Debate Tournament and second at the USA Debate Tournament of Champions. He has received nearly every USA award connected with debating. He has taught debating in over 34 countries. He did radio for 17 years, hosted the Vermont Reggae Festival for 16 years and has been the host of the LDU television show FLASHPOINT for over 400 episodes. He has recently published five books, advises several governments on educational policy and is one of the world’s most renowned debate educators. He is not ashamed to be known as a Doctor Who fan.